Will Healthcare Get a Budget Boost After the Pandemic? 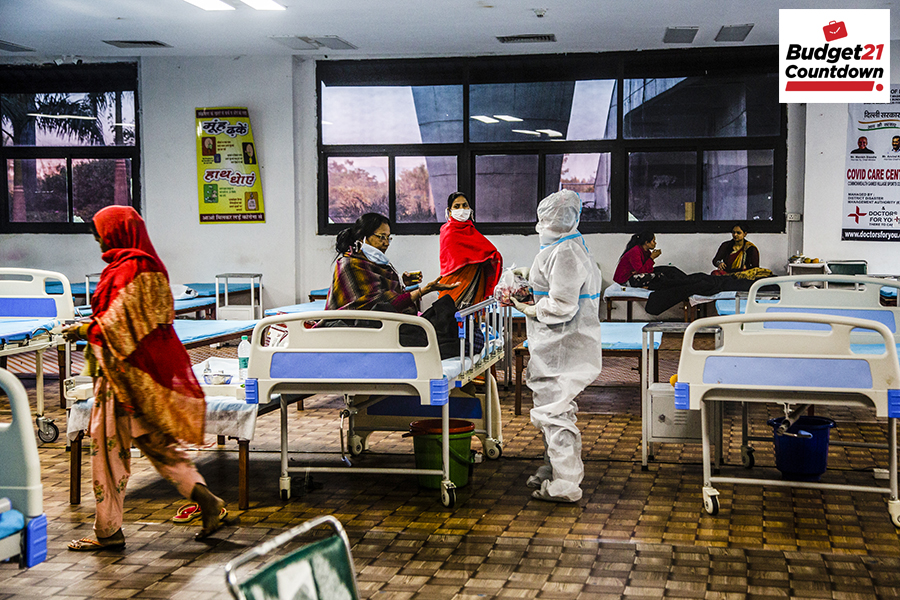 The Union Budget on February 1, being presented in the shadow of the pandemic, is bound to have a strong health focus, given that Finance Minister Nirmala Sitharaman is expected to present a roadmap for vaccinations against the coronavirus and strengthening of overall health infrastructure, while also indicating how much the government actually spent for tackling Covid-19 in the fiscal year 2020-21. In December, addressing a conference hosted by the Confederation of Indian Industry, Sitharaman promised a “never-before” Budget, with investment in health being critical, “not only to keep our lives safer, but also to make our health-related expenditure more predictable, for people will not be spending for health out of their pocket”.

In the Union Budget last year, health was not really a top priority for the Centre, with the quantum of investments being at Rs67,112 crore, far below the amount of money being spent on sectors like defence, home affairs, agriculture, food and public distribution, rural development, road transport and highways, and railways. Given that India’s allocation toward healthcare has conventionally not exceeded 1 percent of the GDP, the lowest among the BRICS nations, making that landmark shift toward increasing spending in the face of a public health emergency is more crucial.

“The National Health Policy (NHP) looks to double health spending to 2.5 percent by 2025, which is also a modest, minimalist aspiration,” says Srinath Reddy, president, Public Health Foundation of India (PHFI). He explains that despite financial constraints due to the economic slowdown in the wake of Covid-19, if the government wants to reach the 2.5 percent goal, health expenditure has to increase by at least 25 percent this year, excluding vaccine and vaccination-related costs. “And it must continue to increase at that level for the next 4-5 years, at both the Centre and the state level. The needle can’t move unless states start matching contributions of the Centre, but the states will not start doing that unless the Centre pays.”

At the time of writing this article, India had recorded over 10.7 million coronavirus cases in the country, while also managing to vaccinate around 2.8 million healthcare and frontline workers in the first phase of vaccine rollouts that started on January 16.

Health as an economic driver

“The government had announced broadening certain schemes in the last Budget, hinting that they eventually want to go towards Universal Health Coverage (UHC),” says Hitesh Sharma, tax partner and life sciences sector leader at EY India, talking about how the government can take steps to widen the scope of the Pradhan Mantri Jan Arogya Yojana [PMJAY, or Ayushman Bharat], which currently covers close to 50 crore people with an insurance cover of Rs5 lakh per family.

“First, we don’t know whether the government expenditure towards Covid-19 will go out of the Budget or the PM-Cares Fund. Second, will the current health cover that the government has been providing be used to vaccinate the needy? Third, can the Rs5 lakh limit be expanded taking into account all these expenses and ensuring there is money left for people to take care of critical illnesses?” he says.

Reddy agrees, adding that Ayushman Bharat needs to cover more people, particularly the “missing middle” of the country, who are vulnerable to serious health expenditures. This can happen, he says, through better linkages between the National Health Mission (NHM) and the PMJAY, continuity of care across primary, secondary and tertiary health systems, and covering costs of essential drugs and diagnostics in public health facilities.

He points out that India has been realising the importance of health as an economic driver rather late, and that it is important to make a conscious decision to spend more on health even if there is an economic slowdown. “Look at lessons from other countries,” he says, referring to how Britain introduced universal health coverage immediately after the Second World War (WW2) through the National Health Service, how Japan introduced the UHC in the early 1960s when it was recovering from the WW2 defeat, and how many Southeast Asian nations introduced UHC in the late-1990s and early 2000s when they were recovering from the Asian financial crisis.

Through this process of streamlining public health policy, it is important for the Budget to focus on the people and invest more in a skilled health workforce.

“With the ongoing pandemic, there will be a requirement of enhanced short-term funds for vaccines. But other critical areas like public health systems, epidemiology support, contact tracers, outbreak response and—most importantly—human resources, also need to be strengthened,” says Anant Bhan, a global health, bioethics and health policy researcher. “Many rural and semi-rural facilities face the issue of having medical equipment and infrastructure, but no trained staff to use or maintain them. So hiring and training of human resources needs to be done on priority.”

Reddy points out that the health sector also presents a great employment opportunity, particularly for women. “We are already facing a shortage across the board, right from community health workers to specialist doctors. Scaling and upskilling of human resources in healthcare is also particularly important when employment generation is shrinking in other sectors like agriculture, industry or services due to technology and mechanisation.” He explains that strengthening of health and wellness centres, which is a declared intention of the government, must be accompanied by measures to strengthen primary health centres, community health centres and offer better linkages to upgraded district hospitals.

“To deliver healthcare as close to home as possible, these centres need to be adequately staffed,” Reddy says. “And if the government is serious about providing comprehensive health care beyond maternal and child health and infectious diseases, they need to employ and train double the number of Accredited Social Health Activists (ASHAs) and Auxiliary Nurse Midwives (ANMs).”

Sharma of EY India says that giving a push to digitising records would ensure the government’s health spending is more productive. “Not much has happened on this front during Covid-19, but this is the time to build the right ecosystem and create digital records simultaneously with vaccination.”

The government can leverage the strengths of the private sector, believes Prem Sharma, founder of healthtech startup DayToDay Health, which provides end-to-end patient management solutions. “The finance ministry has provided a series of stimulus packages to the healthcare industry, and certain policy changes are proposed to leverage private sector resources for testing, hospitalisation, equipment and supplies, and a central intelligence system.” He adds that effective implementation of resources dedicated to fighting the pandemic calls for “agile policy formulation followed by guidelines for strengthening procurement, defining standards, payments etc.”

Bhan also emphasises on effective implementation strategies to make the most of budgetary allocations. “We need more funds at the macro level, but sometimes, even with sufficient allocation, there is no efficiency in utilisation of funds,” he says, adding that some of the reasons for this could be the system not absorbing the funds properly, or the funds being made available late in the financial year, and impediments at both the Centre and the state levels. “Systemic issues in using budgetary allocations need to be sorted out.”

In the long term, Sharma of EY India says, many countries are likely to go in the self-reliance mode that India is now talking about. “That is where, if you are not connected in the innovation world, you will lose out. So there should be a focus on health care innovation in the Budget. Whether that can be done through Indian companies or attracting foreign companies to set up innovation centres here is worth thinking about,” he says. “Be it standard deductions, patent box, or sitting down with the industry to understand what it requires, the government must figure out how to create an ecosystem that will make India part of the global innovation network.”